IWSG: I Tip My NaNo Cap To You 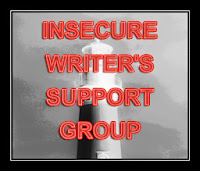 Well, I didn't win the challenge but I did get off to a decent start. Though I am a bit bummed I fell short of the 30k mark. Balancing writing time and my nutty personal life truned out to be a bigger challenge in November.

So what did I learn this month?

1: Getting off to a good start is paramount!

I had been told to write as much as I could the first couple of days to surpass the daily requirement. I didn't really heed this warning, big mistake. There were days when I could have used the extra word count to compensate for unexpected setbacks.

2: Have a good outline and stick to it.

My outline was too general and I ended up spending too much time trying to figure out in what direction I wanted to take my story. The other thing that messed with me was by day 5 I had taken my story completely off its tracks in a different direction (into a wall) and basically gave my outline the middle finger.
That was bad.
Bad Elise, bad!

3: Avoid traveling during the challenge. You'll never get as much writing done as you think you will.

I told my self I'd get tons of writing done in the car. And I did... on the way down. But on the way back, it was all zzzzzzzzzzz. :P

4: No matter how prepared you think you are...BAM! Life comes along and kicks you in the ankles and sabotages your writing time.

During the challenge I had to deal with some family crap and I lost two days of writing. Ugggg.
Sometimes your real life gets in the way, but that's ok. Deal with it and move on.

So I had a few setbacks. It happens. And though I didn't reach my goal, I am happy for giving it a shot and sticking through until the very last day. I also want to thank the NaNo team for all their work to make this challenge possible, and I tip my hat(s) to you and everyone who won NaNo or at least gave it a shot. And I also want to thank everyone for stopping by with your encouragements. You guys were great and made this challenge totally worth while. I wish I had had the time to reply to each and every one of you. However, I do plan on spending most of December trying to catch up with you all and see what's going on in the bloggosphere.

Thanks again for all your support and to Alex and the IWSG for another great bloghop this month. You all rock!

Email ThisBlogThis!Share to TwitterShare to FacebookShare to Pinterest
Labels: back to work, I tip my hats to you, IWSG, nanowrimo, tea cosies on my head, thank you all, that's a hat trick, writing