DRAGONFLY WARRIOR Has Made Me An Instant FANGIRL

After reading the blurb for Jay's book Dragonfly Warrior, I was hooked. It has all the elements that I love in a fantasy story and I can't wait to get my hands on it. And then I saw the cover and I squealed! 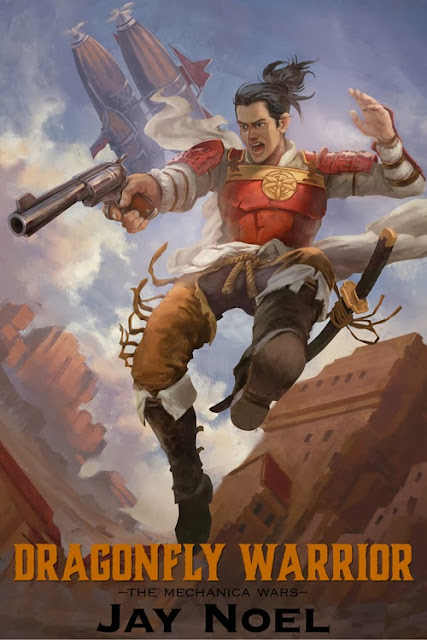 At the age of twenty, Kanze Zenjiro's bloody footprints mark the bodies of those who stood in his way to protect the throne of Nihon. Now, the tyrannical Iberian Empire is bent on destroying his kingdom, and they send their steam-powered giants and iron spiders against him.

Zen embarks on a quest that takes him on the most dangerous journey of his life. To succeed, Zen must live up to his nickname, the Dragonfly Warrior, and kill all his enemies with only a sword and a pair of six-guns. He is called upon to somehow survive a test of faith and loyalty in a world so cruel and merciless, it borders on madness.

Dragonfly Warrior is a steampunk adventure like no other. It's a dynamic mix of Asian and European mythology, the Wild West, martial arts, traditional fantasy, and high powered steam action that will keep you turning the pages.

After doing some freelance writing and editing for more than a dozen years, Jay decided to stop procrastinating and pursue his dream of being a novelist. He's been blogging for over eight years, and even had a comedy podcast syndicated all over the internet. All of that was fun, but all the steampunk-inspired stories in his head just wouldn't leave him alone. Jay spends his days working in medical sales, but he can be found toiling over his laptop late at night when all is quiet.

Connect with Jay Noel and/or send him cookies at: