Getting Hit With Hearts 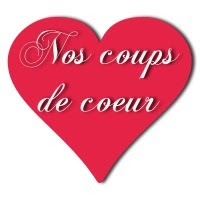 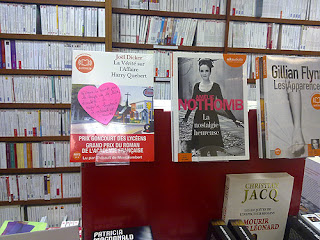 Anyway, the reason I'm going on about this is because yesterday I went into a local bookstore just to buy postcards (yeah, that didn't go over so well) and, I noticed something different . . . 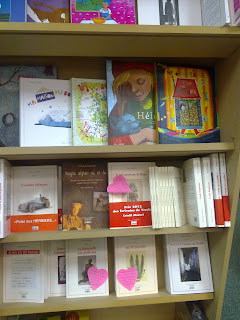 Stuck to various book covers were pink, heart-shaped sticky notes. On them was a brief, hand written description about the book. Sacré bleu! The books were hit with hearts! Actually, it was the bookstore's way of saying, this book is our 'coup de coeur', or in this case you could translate it to something like, 'our top picks.' 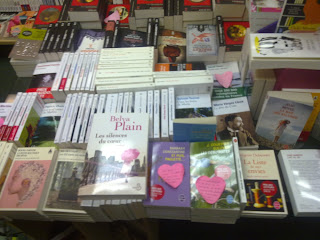 Now I've seen other bookstores use similar methods to get people to give a book a try, like wrapping the cover in brown paper and writing a few inticing words on the front to hook a reader. However, this was the first time I'd seen the heart-shaped sticky notes used in France and I thought it was pretty cute. It's a simple idea, one that's been used before, and you know what? It worked on me.

I noticed one of their books hit with a 'coup de coeur' sticker. I picked it up, read the micro-review and bought the book. I know. I'm so weak. I've been a recovering bookbuyingaholic for months and now I've relapsed all because of a heart-shaped sticker!

It seems my 'to be read' list isn't ridiculously long already thus the need to buy another book, and in French to boot *deep breath* which only means it'll take me twice as long to read the damn thing. *shakes head in shame--then opens book*


Have you guys seen this too? Any other techniques you've noticed bookstores using to entice its customers? Would this method work to get you to buy?
Posted by Elise Fallson at 01:19

Email ThisBlogThis!Share to TwitterShare to FacebookShare to Pinterest
Labels: bookstore, can you tell which one I bought? books, coup de coeur, french, heart, hit me with heart, I'm so weak, It better be a good book, when is it back to school