In Review: Anticipation of the Penitent 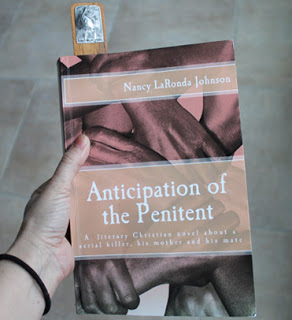 Anticipation of the Penitent
by: Nancy LaRonda Johnson
Received through a giveaway

Quote from the book:


"No one knew the whole story of the caged woman. She appeared to be a living receptacle for the shipment of evil in today's society. "


The Anticipation of the Penitent is a literary Christian novel that falls into a category that normally is not my genre of choice. I  sometimes hesitate to read religious works, but I was revealed to see that the strong Christian theme in this book never came across as proselytizing under the banner of literary fiction.

This is the story of Thomas, a serial killer who believes his father is Satan. Thomas is devoted to his father, worships him even into adulthood, and would do anything to please him, even if that includes taking the lives of innocent children. But this book is also about Thomas's mother, Alezea. She is a spiritually splintered woman, convinced she can never escape Satan's control. She is forced to do horrible things and even helps Thomas dispose of his victims. With the aide of a close friend, Alezea finds the strength to reach out for help and salvation. But more than anything, Alezea wants to save her son. Her efforts lead them to Gabriel, a Christian community that helps people find their way to a better life through Christian ideology.

Several scenes in this novel made me emotionally and physically uncomfortable. But despite these unspeakable acts, I never found them to be overly gruesome in their description and I can honestly say I'm grateful to have had the opportunity to read this novel. The other reason why I enjoyed this book is because it was extremely well written. The author, Nancy LaRonda Johnson, had me feeling some degree of compassion for characters that normally I would want to see burn in Hell for all of eternity. And as a mother, I could understand the lengths Alezea went through to try to save her son. There were even moments during the book when I wished I could have called Nancy on the phone to plead with her to stop torturing her characters. That is a testament of how emotionally invested I became in these characters lives.

Nancy also has a strong command of the English language and made the story flow effortlessly, even though some of the most difficult moments of the book. In the end, this book isn't about the horrible acts committed by Satan or Thomas or even Alezea. It's about the power of faith, the need for forgiveness, and letting go.

Overall, I think this was a very good book, despite it not being something I would normally pick up, but I'm glad I had the opportunity to read it.