By now, many of you have heard of the Mars One organization (based in the Netherlands) and their colossal undertaking to send astronauts to Mars and establish the first settlement on the red planet. This project has received significant support from both the scientific community and the general public. In fact, the call for volunteers to live out the rest of their lives on the cold, hostile planet generated over 200,000 applications from people in over 140 different countries.

Though this may sound like science fiction to some, the technology to send people to Mars already exists. The real challenge facing the Dutch entrepreneur and CEO, Bas Lansdorp, will be to find the financial backing to fund this endeavor. The estimated cost for this one-way trip is around 6 billion USD, and that's not including the cost it will take to maintain human settlers for the rest of their lives. So how does Bas Lansdorp plan to fund Mars One? Buy turning it into a long-term, global reality TV event, beginning with the astronaut selection.

I'll be honest, the idea of going to the red planet and becoming one of the first human settlers (Martian!) on Mars fascinates me. So much so, that when I heard the deadline for the application had passed, a small part of me was disappointed. Can you just imagine how amazing it would be to look out onto a completely different horizon and watch dual moons move across the sky. Or see Earth as a tiny speck of light in a sea of cosmic darkness? Of course, I would never seriously consider going to Mars but . . . if I didn't have children . . . maybe I would. I started thinking about my life and going to Mars wasn't that difficult to wrap my head around.  Astronauts will have access to the internet (limited with a seven minute delay) but one could still communicate with family and friends. Heck, I already depend on the internet to talk to family and friends from around the world, what's another 34 million more miles? And can you just imagine--blogging from Mars! :D But as I get older I realize, much to my chagrin just how many of my dreams will never come to fruition. Sounds a bit depressing but, c'est la vie folks.

Anyway, it'll still be amazing to be part of a generation that gets to see it happen. Here's the general projected timeline of the Mars One project (source wikipedia - Mars One):

2013: a replica of the settlement will be built for training purposes.

2015: The astronaut selection process will be completed; six teams of four. They begin a 7 year training program for the mission.

2018: An exploration vehicle will launch to pick the location of the settlement.

2022: A SpaceX will launch with the first group of four colonists.

2023: The first colonists will arrive on Mars in a modified Dragon capsule.


A few more things to think about:

It will take over 200 days to travel to Mars. While in transit, the spacecraft will provide a mere 20 m3 living space per astronaut. Once on the red planet, the modular, inflatable habitat will comprise approximately 1000 M3 living space (about 250 m3 per inhabitant for a team of four).

The amount of radiation astronauts will be exposed to during the trip and while living on the planet is a major health concern, especially during a solar flare or solar particle event.

Once on Mars, water for survival will be extracted from the Martian soil and astronauts will be required to grow the food they eat using hydroponic methods. Hope you like your greens because this means no bacon or nutella for the REST OF YOUR LIFE.

****
Anyway, these are only a few of the many issues surrounding this project, and I'm not even getting into the religious, moral or ethical debate some people are raising. But my question to you, dear reader, is this: If the opportunity to go to Mars presented itself, would you go? And if you had to go, what personal items would you take with you?

Knowing I'd have internet access and the ability to video call, here are a few items I'd want to take: 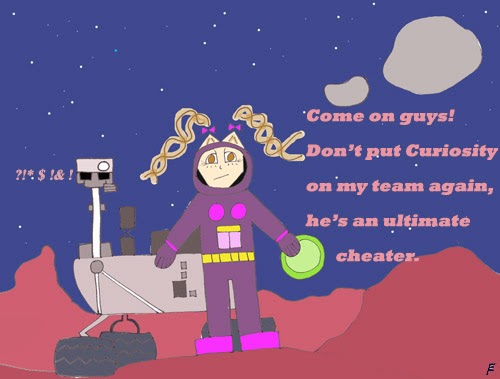 Email ThisBlogThis!Share to TwitterShare to FacebookShare to Pinterest
Labels: Mars, Martians vs Earthlings, Marvin here we come, Na-Nu Na-Nu bitches, Only if I can bring a lifetime supply of bacon and chocolate and come back to Earth when I want, who would have jurisdiction on Mars
Location: Planet Mars