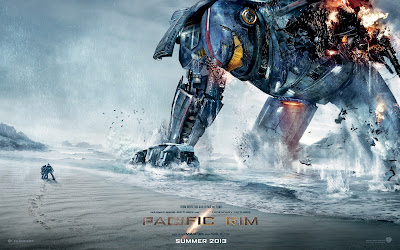 So I went to the cinema to see Pacific Rim a couple nights ago. I’ve been mulling over this movie ever since.

I’m just going to get right down to it.

Pacific Rim was incredible from a CGI, special effects stand point. The Kaijus and Jaegers were pure awesome. The weaponization of the machines—awesome. The elbow rocket and chain sword—awesome…I could go on, but I think you get my point. The battle scenes were huge taking place on the ground, in and under the water, even in the air. I got a kick out of seeing these mega mecha machines marching into the Pacific Ocean making it look like they were wading through the shallow end of the kiddie pool. And of course, I also really liked the concept of “drifting” with another person via a neural bridge as means to merge with the Jaeger. All of that was really cool. Another element that got me all kinds of excited was seeing Jaegers hailing from different countries, Australia, China, Russia, and the USA. Guillermo del Toro and his team did a superb job of personalizing each Jaeger to its country of origin. I also thought they did a great job of creating Pacific Rim Kaijus reminiscent of the original Kaiju films. Then there was the set of the Hong Kong facility that housed the Jaegers which was also incredible and had great attention to detail. And we even get to see a decent martial arts fight scene between Mako Mori (she was simply bad ass) and Raleigh Becket.

However . . . there were several things that disappointed me about this film.

Lets start with the Jaegers. I was disappointed to see the Chinese Jaeger, Crimson Typhoon, get so little screen time. I thought it got taken down way too easily. I mean the thing has three arms and is piloted by triplets--COME ON. At the very least, it should have had a more honorable death. It would have also been fun to see the Jaegers take on the personalities of their pilots through their fighting styles. We kinda get a taste of that with the Russian Jaeger, Cherno Alpha, when it pounds the crap out of a Kaiju--all power, no finesse, just like I’d picture the Russian bear with a lost camper. But Cherno Alpha had very little screen time as well and was ripped to shreds shortly after Crimson Typhoon. *sigh*

Also, I would have liked to have seen a Japanese Jaeger, just sayin…

Then there was the plot. In the film, the Kaijus are smart, adaptable and have a hive-like mind. Wouldn't this have prompted them to change their strategy when the two scientists drifted with the newborn? And I think the film could have expanded on why the Kaijus were after Newton, the scientist who drifted with the secondary brain. Unfortunately, the Kaijus never really did anything with him except for one that sorta licked Newton, but it wasn’t clear what that was all about. Honestly, the Kaiju should have just eaten him.

The characters. Le grand sigh. This was by far the biggest bummer in this film. I never connect with any of the characters. Live or become Kaiju chewing gum, it didn’t matter to me. Could this be because I’m a heartless b****, OR is it because Pacific Rim cruelly lacked character development? Though highly debatable, (; I’m going with the latter. This film borrowed from many other science fiction movies and reminded me a lot of Armageddon, Independence Day, even Top Gun. But with all this potential, it never quite hit the mark. The rivalry between pilots Becket and Chuck could have easily been better developed with more trash talking between them (Maverick vs Iceman, anyone?). And the supposedly deep emotional connection between Becket and Mako I thought was terribly done and failed to convince me anything was really there. And remember when Bruce Willis sacrificed himself in Armageddon? I don’t know about you, but I shed my little tear. But when Stacker and Chuck blew up, I was like…meh, pass the chips.

There was another point in the film where I felt pretty indifferent and that was during Mako’s traumatizing childhood memory when she drifts with Becket for the first time. At the end of that scene, we see her as a small child staring up at a Jaeger that just defeated the Kaiju that killed her family. Stacker, the pilot of the Jaeger, comes out and stands on top of his Jaeger (why the hell he’d do that in the first place I don’t know) like he’s Superman smiling down at little Mako (who is so far away she’s just a speck from where he’s standing, but I get I’m just being bitchy at this point). Anyway, he’s looking at her and she’s looking at him as if he’s some giant ice cream cone, and the whole scene is kinda cheesy. You know what would have been better? Having the Jaeger bend on one knee, put his hand down in front of little Mako, and have her climb into this massive metal hand and have him raise her up a la King Kong. Cliché? Absolutely. Effective? I think so. The scene could have also included a quick 5 second shot of Stacker in the Jaeger looking at the child with tenderness in his eyes and why not have him whisper a promise to be her protector for the rest of his life…or something like that.

Which brings me to the dialogue. This movie had the potential for some great lines, peppered with humor but it fell short here as well. Honestly, there was some pretty bad lines in this film. The best ones were what you got in the trailer like,

“…today, we are cancelling the apocalypse!” ç I thought that was pretty awesome.

Overall, I think this film just needed to be a bit longer to carve out believable and more rounded characters. But don’t get me wrong, I didn’t regret the money spent on tickets or the time spent looking for a cinema that still had a showing in English. The 3D was well done and this film, of massive proportions, deserved to be watched on the big screen. But for the rest, damn, it could have been so much better.
Posted by Elise Fallson at 15:32

Email ThisBlogThis!Share to TwitterShare to FacebookShare to Pinterest
Labels: awesome special effects, could have been better, don't get mad at me Michael, more like Pacific Grim, movie, not bad, Pacific Rim, review, TLDR, Where's my God damn shoe