Don't be a Cow


I live in rural France. 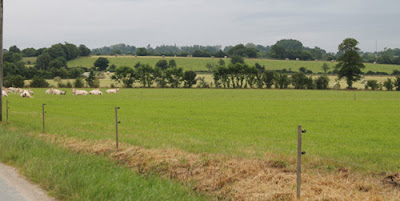 It's nothing exciting and no different than a lot of rural places across the globe. Well, the trees are different. I grew up in the US, in Virginia, and the trees there are unlike the ones here. I miss the east coast, but I digress. A few weeks ago, the farmer up the road moved his cattle to a pasture next to our house. Moving the herd is fairly simple. The farmer closes off driveways and side roads with rope and ushers the cattle down the street into the next field. Now, most people don't live near cattle so they don't realize just how big and powerful these animals can be. Let me throw some numbers at you. The average weight of a mid-sized cow (Charolais pictured) ranges from about 630 to 1,130 kg (1,400 to 2,500 lbs). Keep in mind, that an older model Volkswagen Beetle weighs about 1,860 lbs.

I thought about this as I watched the cattle hoof it down the road and realized the only thing separating the vertical me from the trampled, flattened me, was an old flimsy line of rope. That's it. And you know what? It worked. The herd went where they were supposed to go, and not a single cow tried to break the line to go into greener pastures.

There are times in life when the only thing keeping us from greatness is just a flimsy line of rope that we've constructed out of fear, self-doubt or ignorance. Don't let these obstacles keep you from forging your own path and achieving your goals. It's fear that keeps us following the herd, whether it's going to Disney or off a cliff. So don't be afraid to question what's going on around you, be brave when you have to be, and don't let yourself be tricked into believing you can't, because guess what? You can.

Don't be a cow.
Be a lion.
Be a dragon.
Or just be yourself,
ready to break through the line of fear and doubt.
Then, be Great.

Email ThisBlogThis!Share to TwitterShare to FacebookShare to Pinterest
Labels: Happy Friday, I need to stop being a cow, moo, talking to myself