I wrote this a few months ago and posted it. Five minutes after hitting the publish button, I took it down. I'm not sure why, must have been feeling exceptionally insecure that day. Anyway, I thought I'd give this another shot . . . 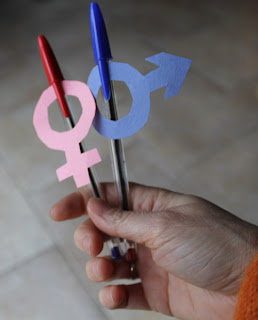 In the 1920s, Virginia Woolf contemplated and addressed many questions that revolved around sex/gender and its influences on writers, especially women. Do women write differently than men, and can androgyny be achieved in literature?

Well, when I hear the phrase "you write like a girl," I can't help but feel a twinge of indignation because in the back of my mind I'm also hearing "you hit like a girl," which I think we can all agree is never intended as a compliment, even if there are many women that can knock the bloody lights out of a average man.

Overall, I think gender probably does have an effect on writing style but I'm curious to what extent and if the average reader can pick up on the subtleties. Do you think you could read a passage from a book without prior knowledge of who penned it, and determine whether the author was man or woman? How about we have a little fun with this. Below are 7 short excerpts from well known published authors. Let me know in the comment box which excerpt you think has 'man wrote this' vibe and which has 'woman wrote this' vibe. (:  This is intended to be a fun exercise and I understand the answers won't really prove anything seeing how this "experiment" has zero scientific merit, the sample size is small, and the excerpts are short. But, I'm still curious to see what you guys come up with and think we can have some fun with this.

I'll reveal the names of the authors and books where the excerpts were taken from in Friday's post.  (=  Oh, and one more thing. If by chance you recognize the excerpt and already know who wrote it, don't be an tool and give the answer(s) away, please. (;

1)  There's something else in their eyes, too, something that will haunt them, all unacknowledged, until the day they die, and cast its shadow over even their happiest days. The fear of what they did. What they did in the unremembered part of their shared dream.
That's what keeps him where he is and makes him take the telephone even though he is sweltering, roasting, fucking melting.

2) Like and equal are two entirely different things.
For the moment she had escaped from the power of IT.
But how?
She knew that her own puny little brain was no match for this great, bodiless, pulsing, writhing mass on the round dais. She shuddered as she looked at IT.

3)  Silence.
You'll find your way. Trust me.
Tentative, she inched forward blindly. Leap of faith? Katherine could not even see her hand directly in front of her face. She kept moving forward, but within a matter of seconds, she was entirely lost. Where am I going?
That was three years ago.

4) It turned its back on me and began to walk back the way I had come, toward the village, back to the empty house I had left that morning; and it whistled as it walked.
I've been here ever since. Hiding. Waiting. Part of the bridge.

5)  The horizon merged with the dunes into a single mass of dusty beige. Out here even the sky is sucked dry of all color. It is a smudge of pale taupe, paler topaz; a trace of blued-steel, met by the blade of the horizon. To the south, east and west there was nothing, miles and miles of nothing.

6) At last, after some days, the sun again appeared and shone brightly over the white ground, but he went to bed again behind the mountains at a very early hour, as if he did not find such pleasure in looking down on the earth as when everything was green and flowery. But then the moon came out clear and large and lit up the great white snowfield all through the night, and the next morning the while mountain glistened and sparkled like a huge crystal.

7) "Ohhhhh . . ."
It was the long cry of a man gone over a cliff into Eternity.
It seemed we sat waiting to hear him hit bottom.
Far off in the hills in the upper part of the house, his door banged shut.
My soul turned over and died.

So what do you think? Was it hard or easy to decide? Do you think you write like a guy or a girl or neither?