I know this 35 year old crazy lady that recently bought herself a toy doll not too long ago. She'll remain nameless because well, she's crazy. Anyway, every time crazy lady goes into a toy store, she ends up buying something for herself. Crazy, I know! I heard the last time she went in the toy store she came out with an overpriced Darth Vader Lego key chain whose feet light up when you press his belly. Seriously, so immature.

Anyway, crazy lady did it again. She went to buy her friend's four year old daughter a birthday present and came out with the strangest thing, A Gothic Vamps doll. I heard she kept mumbling something about it being a steal at over half off the original price. Now, I don't know much about these dolls, but they're apparently part of a series dressed in Gothic attire with vampire inspired make-up. The store was discontinuing the series because they weren't selling and crazy lady snatched the last one.  I can just imagine the conversation between crazy lady and the cashier...

So because I'm a curious creature, I went to crazy lady's house and asked her directly if she really bought the doll for herself. She smiled at my question and welcomed me inside. Not only did she admit to buying the doll, but she also pulled it out of a large black and bright pink box to show me. Crazy lady was crazy, but she turned out to be pretty nice as well. I then asked her why she bought it and the strangest conversation ensued:

"Well Elise," she said picking the doll off the table. "I bought her for many reasons. First, I love her bold and dramatic make-up. From her blood red lips to her striking blue and pink sparkly winged eyeshadow and thick black eye liner. Then there's her hair. She has Merida hair, only blond. And feel how soft it is." She put the doll in my hands and I felt the thick tight curls of hair. She was right, it was super soft and smelled like vanilla. "The other thing I love are her eyes." I looked back at the dolls face and the eye lids opened to large round black irises framed with fabulous thick lashes. "I'm so tired of blond haired dolls with blue eyes, you know?" I nodded in agreement but wasn't quite convinced yet. "Now, look at her clothes. She's got a Gothic style that's also playful with the red flared skirt, little black bows, and high collar of her plunging V neck white blouse. She also has these cute little accessories." She pointed to the necklace and leather bracelet to make sure I noticed. "And of course, how can you not like the dragon tattoo in the middle of her chest! Barbie never had a tattoo like that when I was growing up." I giggled at the image of a tattooed goody two-shoes Barbie that bubbled in my head. The dragon tattoo on this doll was risqué but it went well with the overall ensemble. Crazy lady took the doll out of my hands and lifted the doll's skirt. "She also has a real proportioned waist, real thighs and a cute little belly that pooches out. Nothing like some of these ultra thin and long legged body types I see on other kinds of girl dolls. And as if that wasn't enough, she has black leather and lace underwear, black lace thigh-high stockings and black thigh-high leather boots!" (O_O) I forced a smile because frankly, staring up a dolls skirt was a bit weird even for me, but at the same time, crazy lady was right. The doll didn't have a freakishly thin body figure. And she did have black leather underwear.

"I agree there are some things cool about this doll," I said, taking it out of crazy lady's hands and smoothing down the doll's skirt. "But for one, she can't stand on her own feet and two, the plastic feels like a low grade material." I tapped my finger on the plastic to make a telling hollow thud sound. "And why is only her face painted a bleach white vampire color. What about the rest?" I said.

"Because Elise, she's not a real vampire," crazy lady replied. "And I don't care if she can't stand by herself, I'm going to place her in a doll stand. I'm not actually going to play with her, you know."

Later on that afternoon while driving back home, I thought about my conversation with crazy lady and realized she wasn't all that crazy. Maybe she was a tad lonely and a bit eccentric, but not crazy. Plus, it was so sweet of her to give me the doll. But I think I'll wait a few years before I give it to my daughter. (; 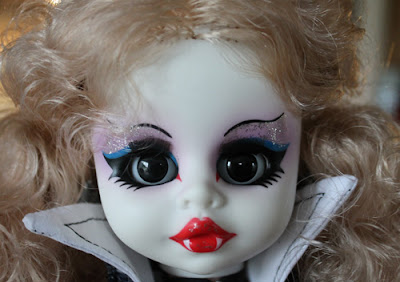 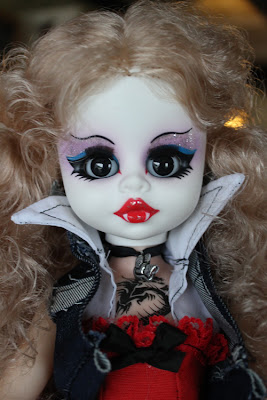 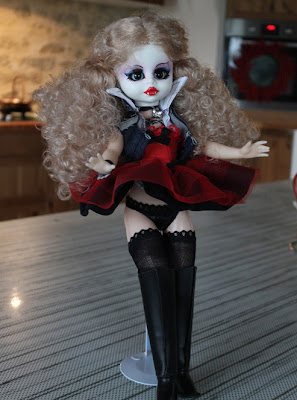 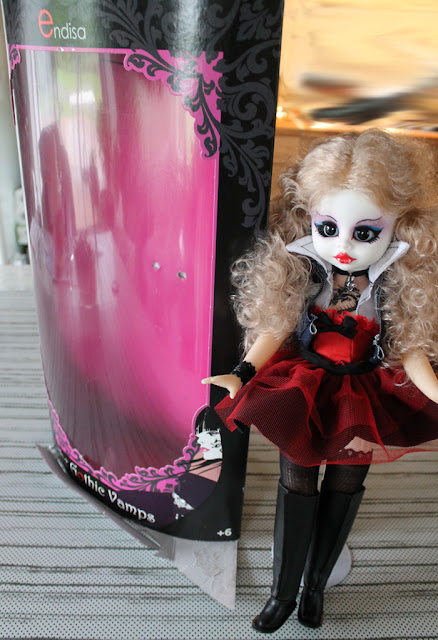 See the +6 on the bottom of the box? That looked weird to me too.
I'll have to ask crazy lady about that next time I see her. Call
me old fashioned, but no way would I ever give this to a 6 year old,
or even to a 10 year old!

So what do you think about crazy lady's doll? When was the last time you were given a toy or bought yourself one from the toy store? (:

Email ThisBlogThis!Share to TwitterShare to FacebookShare to Pinterest
Labels: crazy lady, pretty, random post, toys, you have got to be kidding me
Location: Crazy Corner