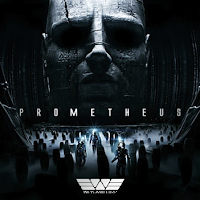 I saw the midnight showing of Prometheus last night!

I didn't even know it was coming out until fellow blogger and author, Michael Offutt tweeted about it. He mentioned it was being released in Europe one week earlier than the US, and I was like, 'Really? Going to check this out!' And he was like, 'No fair,' and I was like, 'Hahah I'll watch it on my Mom's TV and think of you,'and he was like, 'it comes out in the theatres dumb- dumb.' And I was like *facepalm* 'D’oh!'


Okay, I’m paraphrasing a tad but that's basically how it went down. Trust me. But anyway, I got bummed right after because I really hate watching English movies in French. With the new French TV system, we can watch a lot of English movies/series in the original version. Plus, the closest movie theater that offers the English version is a four hour drive away. ):  Anyway, where was I... oh yeah, signing off twitter before I say anything else incredibly stupid to share with the rest of the twittersphere. 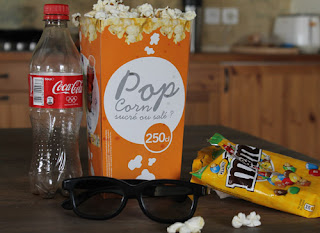 Back to Prometheus... Do you have any idea how much it cost to get movie tickets over here! I hadn't been to the movies in years...except for Avatar so I guess it wasn't THAT long ago. But still, Prometheus cost me 12 € for the midnight showing, plus 1 € for the 3D glasses (13€ comes out to about $16). Remember when movie tickets cost $5? Anyway, tack on 5.10 € for a 250cl bag of popcorn that tasted like the biodegradable packing peanuts and low-fat salt.
There's no such thing as low-fat salt, Elise.

I know, but if there was, this is how I would imagine it tasting like-bad. Can I continue?
Is this a multiple choice question?

I don't like watching horror movies. But, when I was younger and obviously braver, I watched the first three Alien movies so I felt I could make an exception. Plus, this was an opportunity to see something before folks in the US. So, I decided to suck it up, wince through the bad French voice-over just to bring you this AWESOME post *eye rolling*. Man, I need to lay off the caffeine.

In short: Prometheus was good but not great.

The visuals and special effects were brilliant. The 3D effects did not outweigh the story line and the movie moved along beautifully. The ship's interior design was awesome as well as all the holographic projections. But, it will not live up to everyone's expectations.


This is where you STOP reading if you don't want to read a few spoilers.


I'm a big chicken when it comes to horror/scary movies so naturally, I was expecting to jump out of my seat during the show and pee pee myself. But, it never happened. Not even once during the whole two hours and three minutes. The only part that made me squirm was (SPOILER) the abortion scene. The low scream factor may actually disappoint some people and in my opinion, Aliens was scarier. That being said, I prefer the premise of Prometheus but it did leave me with a few questions and I'm afraid they've set this up for a sequel. Also, the last scene was a bit, meh. I would have (SPOILER) made the head turn for a final mini-head strike at the audience, it was 3D after all.

Anyway, I'm exhausted here and not up to writing a full movie review. Instead, I've opted to list a few random thoughts and commentary I jotted down during the movie. Note: Some of these are quotes, some are not. Remember, I watched this in French so the translation may be a bit off. Also, a lot of this isn't going to make a whole lot of sense until you watch the movie (I'm doing this on purpose to avoid spoiling you too much).

Wow.
Entering atmosphere on LV223 - awesome.
Prometheus - awesome.
Nature doesn't draw straight lines.
I love the space suits, much better than the Michelin man costumes.
RTO 1, I want one please.
Holloway is hot. Vickers too.
Mapping out dome with Fun Balls! I want some.
Can you fix that? Perhaps.
Storm! Go, go, go!
I can't believe you dropped the head.
David, you sneaky android.
It's a termite mound!
DNA match?
Big things have small beginnings.
Vickers doesn't like the accordion, huh.
Are you a robot?
My room, 10 min.
Gazpacho (What? No cornbread?)
Biologist is stupid.
Holy wine cellar Batman!
I want to play with the marshmallow eggs.
Space chart is sick.
Ew.
WTF? A zombie? (someone needs to e-mail me and explain this. I didn't understand why this one didn't follow the normal pathology.)
Revelations.
It's a trap spaceship!
Sometimes to create, you must destroy.
They changed their minds?!
In the words of my generation: Up yours!
Run! She's going down!
Bag the head and blast off.
I smell a sequel.
Fin.

So there you have it. If you enjoy sci-fi and don't mind a lot of unanswered questions, then Prometheus is for you.


Let me know if you're planning to watch this. I'd be interested in hearing what you think. (:

Email ThisBlogThis!Share to TwitterShare to FacebookShare to Pinterest
Labels: avant première, expensive, movie, must sleep, not too scary, sci fi, special effects, this was good, twitter