IWSG: Shelving Your Manuscript In Order To Grow 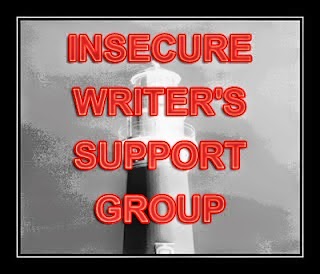 Writing is a solitary and arduous journey that is misunderstood by many. It takes time and is often isolating, requiring the writer to retreat deep into their mind to remove themselves from the exterior world. Writing also demands sacrifice, perseverance, and a good dollop of insanity if you're in it for the long term. And with so many opportunities to give up along the way, being equipped with a lifeline can be the difference between a successful writer and a failed writer. For many, that line is tethered to the online writing community.

The writing community is a global body of countless supportive and encouraging writers that radiate positive thinking to help struggling writers. So when a fellow writer suffers from writer's block or bouts of insecurity, the community is there to remind them that they are not alone, help is sometimes only a click away. But most important, we understand because we've all been there at some point or another, when self-doubt becomes the Mount Everest of our insecurities and all we really need is a bit of encouragement to keep going, to keep writing, and whatever we do--We. Never. Ever. Give. Up.

Never give up. That's good advice. But here's the twist: sometimes, giving up is exactly what you need to do in order to move forward. Let me explain.

When I started writing my first novel, it was like teenagers falling in love for the first time. It was a storm cloud of writing ecstasy, it was passionate, an intense exhilaration that borderlined on the obsessive, the crazy, and the extreme. My story and my characters dominated my thoughts day and night. But as time moved on, I slowly surrendered that passion with each round of edits. And with each rewrite, I found myself deconstructing my love for the story. Things changed. I changed. My story changed and not for the better. Then I started to dread having to open my file document to write. Instead of stealing writing time whenever and wherever I could, I was procrastinating in favor of menial tasks. And the longer I put off writing, the greater the feeling of guilt grew inside me. Soon afterward it became painfully clear, that this was no longer the italicised story I wanted to write. And when my mind started dreaming of other stories, other possibilities--I knew. I just knew. Looking deep within, I decided that I could not continue lying to myself. I could not continue to force these words onto the page, so much as I could quell the excitement I felt when I allowed a few moments to imagine a world, in which I was writing something else.

This story was not THE one, and it was time to give up writing my manuscript, and shelve the book.

Sounds like a heartbreaking loves story doesn't it? Well in a way it is. At some point along the path to good writing, a writer will come to the realization that their current project may no longer be writeable. Admitting that is one of the hardest parts about being a writer, and shelving your manuscript, the one that you've agonized and struggled over for months or years even, is the second. And though things may not have worked out the way you originally planned, they can and do get better, if you let them. Because the process of writing a failed manuscript teaches valuable lessons about the craft if, you are open to the idea that the failed attempt will make your next project that much better. For example, my first book taught me 487 pages of what not to write in a novel. In other words, I learned a great deal about voice, plot, and character, and I'm convinced my next book will be better. I may have given up on one manuscript, but I haven't given up on writing.

So I'm here to say, it's OKAY. It's okay to shelve your manuscript. And it is by no means an indicator that you suck or have failed as a writer. It's just the opposite, it's a sign that you're maturing as a writer and know when it's time to pull the plug to move on to bigger and better writing. Shelving your work breaks down the brick walls of guilt and frees your mind to develop new ideas on a healthier and more positive foundation. And guess what? Shelving your work doesn't have to be permanent, but it can be empowering.

So in short, knowing when to let go is sometimes the only way to truly move forward in life and in your writing. And if you want to fly, don't be afraid to let go of the things that anchor you to the ground.


It's been three years since the start of the Insecure Writer's Support Group bloghop, created by writer and author, Alex Cavanaugh, and today marks the one year anniversary of the IWSG website and facebook page. I'd like to extend a huge congratulations to Alex and everyone who has helped (or is helping) make IWSG such a big success. I'd also like to thank the team of co-hosts this month for all the time and hard work they put into making this such a wonderful bloghop. To find out more about the IWSG monthly bloghop, or the IWSG website, feel free to click the highlited links or the button on my sidebar.

Email ThisBlogThis!Share to TwitterShare to FacebookShare to Pinterest
Labels: Don't you dare start singing that damn song, felt like being wordy today so sue me, IWSG, let it go, sorry for my long ass sentences