Virgin Atlantic Has Restored My Faith in Airline Customer Service

My next few posts I'll be highlighting parts of my vacation. Some posts will be simple, others will be long (like this one), and some will be just photographs. Now, I know a few of you arn't the biggest fans of vacation posts so, I promise to keep out the cheesy pictures of my feet in the sand. Actually, no I won't. :P 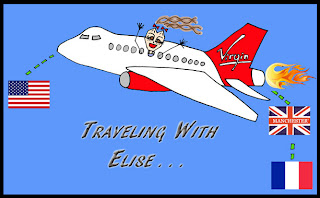 Remember when was the top airline in customer service? I don't. Actually, I did fly when I was a wee one. The only thing I remember, since most of that time was spent nose first in the courtesy barf bag, was that passengers always applauded when the plane landed. My mom however, remembers back when it was king of the sky. It was a time when flying was a luxury and it was fun. Unfortunately, when the company went belly up, customer service and the whole unique flying experienced died with it.

Since then, I've done a bit of traveling and have had my share of flight delays, cancellations, damaged luggage, stolen items, and lost bags. And when my bags aren't the very last ones to tumble down the carousel, they've missed the connection flight. I remember a trip to the  few years ago. I was with my kids and we arrived at Dulles, exhausted, and cranky, only to find out our bags were lost. It took  FRANCE  days to find and deliver our luggage. You know what I got for compensation? A care kit. You know, the ones with a comb, mini toothbrush, toothpaste, one-time use deodorant and socks. Because, nothing says 'we're sorry we fucked up and lost your bags' like an ugly pair of unisize socks. It's sad the number of times my bags have been delayed. Then, there was the time I was sick on the plane, suffering from Ménière disease, which is a nasty middle ear viral infection that causes spinning vertigo, hearing loss and tinnitus. Basically, every time I turned my head, my world would go into a spin and make me throw up. Anyway, the whole flight was a nightmare and a few hours before landing in , I asked the flight attendant if I could lie down. I was dehydrated, dizzy, and on the verge of passing out. You'd think that on a commercial airline, the plane would be equipped with a cot or some kind of drop-down bed for passenger with medical issues. Well, it was my luck that nothing like that was available so the flight crew laid me on the floor in between cabin sections. Worst flight ever, except for maybe the time I flew to . That plane did an emergency landing in due to problems with the plane's hydraulic system. And I wonder why I have visions of planes crashing to the ground in a fiery ball of Hell fire.

Needless to say, I'm not a fan of flying. However, my tumultuous heart and fear of flying seems to have been quieted thanks to my recent flight over to the . I had planned a family vacation, was on a tight budget, and needed to get four people from  to . For the first time, I chose to travel with Virgin Atlantic Airlines. And guess what? I actually enjoyed my flight. That hasn’t happen since I was . . . 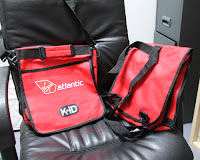 It all started in . While waiting to board the plane, all the kids received a tote bag that could be converted to a backpack. Inside were an activities booklet, Virgin baseball cap, a small digital watch, a pen, and a book. So, lesson number 1: you want happy passengers and parents flying on your plane? Give their kids gifts that keep them quiet and occupied.

Then, there was the food. I felt like I was fed stuffed for 8 hours straight. Right after take-off we were served drinks with cheese pretzels (nomnommnom). Then, dinner was served and holy kazoo-playing zombies, it was edible! I had the Butter Chicken with mixed Basmati Rice, Caesar salad with Parmesan cheese and croûtons. And then we finished it off with Gü dessert. I have no idea what Gü is, only that it tastes better than it sounds. Anyway, I was tickled the food was so good because my previous experiences have been mostly THIS. Anyway, lesson number two: keep passengers happy by keeping their bellies filled and not charging them for a damn soda, ahem--FLYBE!

On the trip back from , each passenger received an amenities "Feel Good Kit." I wasn't impressed over the contents of the kit (airlines still have a love affair with unisized socks that I will never understand), but what impressed me was that each passenger in economy class received a kit. Rejoice! Everyone gets ugly socks! Note, if you want me to "feel good" pack the kit with gummy bears since the other stuff is probably illegal to have on-board. :P

As for the entertainment, everyone had their own individual touch screen which is pretty standard now on international flights. They had a decent selection of movies, TV series, music, games, and everything you could think of to entertain the kids. And, guess what? The headsets were  and they worked! Did you hear that  AIRWAYS?

In the end, what I appreciated the most (aside from not dying in a horrible explosion and having parts of my body scattered for miles over the ), was finding our luggage waiting for us next to the carousel when we arrived in  got through US Customs in . And, when we arrived in , our bags (all 4 of them) were almost the first to come down the carousel--in one piece!

Though I still can't say I love flying, I can say that this trip has tamed some of my apprehension of air travel. Is Virgin Atlantic perfect? No. But Air France, , United, Delta, US Airways and many others can go back to airplane school and take serious notes at what Sir Richard Branson has manage to do with Virgin Airlines in only a few years time. And if you want to read a fun post about Richard Branson, visit Michael Offutt’s post HERE.

So in conclusion, I want to say to Sir Richard Branson and Virgin Atlantic Airlines, thank you. Thank you for restoring my faith in air travel and airline customer service. Keep it up and you'll have a loyal customer for life. But for crap's sake, lose the damn unisize socks!
Posted by Elise Fallson at 00:39