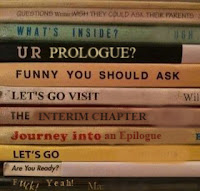 When I started writing my ms a few years ago I didn't have a prologue. Life was good. Then, I became worried thinking I should put one in because the book I was reading at the time, told me I should. So, I wrote what I thought was a prologue, didn't like it and a few months later chucked it. And then I thought, what about a preface or epilogue? Could I, should I put one in? And then I came across something called interim chapters and was at a total loss. Figuring I needed to get a few things straight, I did some digging and this is what I came up with.

In short, a prologue is the introductory segment to your work in progress. The key here is that it's part of the story and can be useful for recounting backstory, usually something that occured earlier in time. The prologue in Dan Brown's Da Vinci Code, for instance, describes the last moments of Jacques Saunière's life (roughly three pages long in the French version).

But a prologue can also be used much like a teaser. It's especially useful if the beginning of your novel is slow to build up. A dramatic or suspenseful prologue can hook your reader right away and keep them willing to read on through a slow beginning. In Amy Plum's book Die For Me, the prologue is less than two paragraphs long and ends with the following: "Jeanne had said that meeting me had transformed Vincent. I have given him "new life." But was he expecting me to save is soul?

You can also have prologues that seem to have little to do with your story, but in fact, foretells a mood or gives your reader clues as to what they may expect in the book. In Paulo Coelho's, The Alchemist, the prologue retells a version of the legend of Narcissus, a man so in love with his own image that he spent most of his time staring at his reflection in the lake until the day he fell in and drowned. In this particular version, we find out it is the lake who misses Narcissus the most because it can no longer see its beauty in the reflection of Narcissus's eyes. And for some reason, it is this version of the legend that the alchemist prefers the most. The idea that vanity can become a selfless act and be used for good gives readers a taste for what is to come in the book. Humm, food for thought...

Now keep in mind, you may be able to convey information in your prologue through flashbacks. This is what I ended up doing with my ms, but it's up to you to decide what works best for your wip.

The preface on the other hand, is written in the author's voice as if he or she is talking directly to the reader. Commonly found in non-fiction books, it's a place where the author can discuss how the book was first conceived, or maybe this is a new edition and the author wishes to highlight certain events that have happened since the first edition. In the book, The Elements of Editing A Modern Guide for Editors and Journalists by Arthur Plotnik, the preface is a three page account of why and how the book came about, but also the importance of well-rounded editors, and properly trained journalism school graduates.

And just as a side note, a foreword is an introduction written by a different person which precedes the preface.

This one is easy. The epilogue is similar to the prologue, except it explains what happens to the characters after the story ends. What's cool here though is you can also use this as an opportunity to switch POV. One of the most famous epilogues is Shakespeare's, A Midsummer Night's Dream that is delivered directly to the audience:

To be honest, I didn't even know what this was until I started reading about them. Interim chapters can be used when you have a lot of story to tell and need to share information with the reader that none of your POV characters know. Some writers have used interims to insert newspaper articles, diary entries, letters, FBI reports, photographs, phone conversations, etc. This information may not be closely connected to the main story but may still be useful in conveying important information. A word of caution, interim chapters have a tendency to break up the flow of your story which can be jarring to the reader. The key is to keep interim chapters short and make sure your story warrants this fragmentation.


So what about you guys? Have you incorporated any of these in your wips? Did you find it easy or difficult to write? Have any good/bad examples you've come across in other books?
Posted by Elise Fallson at 23:19

Email ThisBlogThis!Share to TwitterShare to FacebookShare to Pinterest
Labels: epilogue, funny you should ask, I get it now, interim chapter, preface, prologue, wip, writing