Writing: A Vocation of Unhappiness

"Ecrire n'est pas une profession, mais une vocation pour le malheur," or "Writing is not a profession, but a vocation for unhappiness."Georges Simenon (1903-1989) 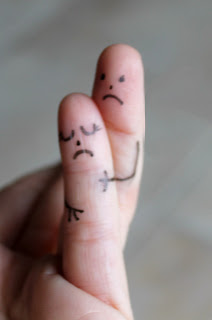 According to many surveys, artists and writers rank among the top 10 careers with the highest rates of depression. So what is it about writing that is so conducive to depression? Is it writing itself that eventually makes us all miserable, or does the writing profession attract people who are already predisposed to depressive states?

One thing that I do know, is loneliness and isolation are often triggers of certain types of depression, and I think many of us can agree that writing is a long and lonely journey at best. You can surround yourself with one hundred people or more if you want (I think that would annoy the crap out of me), but when it comes down to the page, it's just you, your words and your thoughts. No one else but you can pull the right words out of your head and tell your story.

Writers are also good at isolating themselves. They need this time away from the "real" world in order to get back to their universe and inside the minds of their characters which, can range from the most pure to the darkest of all psychopaths. We often hurt and torture our characters and in the process, we torture a bit of ourselves. Now, combine all that with the need for constant approval, the fear of failure, a tendency for depression and an unstable income, and you have yourself a very self-destructive cocktail.

And then, there's this strange multifaceted paradox I see among writers. On the one hand, writing is supposed to be therapeutic and  healing, a way of dealing with emotions and letting go of built up negativity.  But on the other, we often hate what we write, believing our manuscripts to be the worst ever written in recorded history,  and that it should die a slow and horrible death in a blazing fire before subjecting its ghastliness to our peers who will undoubtedly laugh and point fingers at us. Over time, this kind of thinking breaks down a persons confidence, stifles creativity and erects a tower of insecurity in its place. And yet, like a true masochist we keep on writing because if we don't, we feel guilty about it or worse. *sighs*

Novelist Simon Brett, says there are two stages where writers are particularly vulnerable to depression. The first happens at around three-fourth of your way into the book which Brett calls it the three-quarters sag. It's the point where you hate what you've written so far but hang onto the idea of a good ending. The second vulnerable point is once the book is finished. There's about a twenty-four hour period of relief and euphoria. This feeling is followed by a rush of negativity to the forefront of your mind that's caused by the insecurities you managed to shut out until now. Will people like the book? What will the critics think? Will it ever get published?  Is it as good as the previous? What do I do now? ...

On top of all this emotional turmoil, many long time writers also suffer from physical health problems that can be anything from weight issues to back, neck and shoulder issues to the simple lack of sunshine and regular exercise. Many are also sleep deprived and routinely give the proverbial middle finger to their circadian rhythm as they write well into the night, and/or wake up early in the morning to continue their manuscript. Not to mention the nights fragmented by an idea, word or sentence that must be scribble down on the notepad you have laying on the nightstand.

And what's unfortunate is the belief by some, that you can only write a good manuscript if you are a depressed and tortured artist. The problem with that is chronic depression usually has the opposite effect causing fatigue and a general loss of interest in the things you used to enjoy, like writing. It lowers your ability to concentrate, suppress creativity and generates negative feelings such as angst and anxiety, panic, grief, desperation, irritability until you start courting dark thoughts of death even suicide. If you're depressed, be willing to admit it and talk to someone, that's the first step. Then get professional help. You're not going to write your next best thing if you're six feet under.

How do you guys deal with depression and or the writing blues. Do you think it's possible to become a good writer without enduring the bouts of internal turmoil and depression?

Kay Jamison, a professor of psychiatry at Johns Hopkins University and the author of "Touched With Fire: Manic-Depressive Illness and the Artistic Temperament," said writers were 10 to 20 times as likely as other people to suffer manic-depressive or depressive illnesses, which lead to suicide more often than any other mental disorders do.

“I have absolutely no pleasure in the stimulants in which I sometimes so madly indulge. It has not been in the pursuit of pleasure that I have periled life and reputation and reason. It has been the desperate attempt to escape from torturing memories, from a sense of insupportable loneliness and a dread of some strange impending doom.” Edgar Allan Poe

Email ThisBlogThis!Share to TwitterShare to FacebookShare to Pinterest
Labels: depression, I'll hug you, insecurity, only the lonely, suicide, we are a miserable lot, writing, you need a hug